Nexus One: The Arrival

Even as I sit here, I am thinking about the progress of phones and the ergonomic gadgets that I have used to enhance my life.  And yet, this is my first touchscreen mobile device.  So, if I sound incredibly in awe at times and mention something many are over already then just rejoice in my pilgrimage.

The nexus one was a bit of a mythic creature where the insides are working bits and pieces of a brand; a company of such importance in my life I had an immediate attachment to this out the box.  Needless to say the overnight shipping was a dramatic series of status updates and tweets to stir the excitement for myself, among others.  I refreshed the tracking screen on Fed Ex many times in an effort to electronically tap the driver on the shoulder and ask him to hurry.

AND it ‘finally’ arrived in less than 24 hours…..I am already impressed.  I was heading to lunch as I refreshed my Blackberry and saw the “delivered” status.  I got that feeling my my chest where I can’t think about much more than, “What now?”  My wife signed for it as the driver awoke her from her slumber. (^.^) I took a short lunch and swung by the apartment and BAM…. 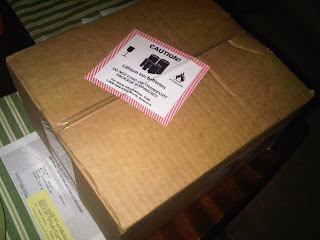 There it sits on my dinner room table.  Oh yeah.  I know what a Lithium battery warning mean.  Not my first overnighted tech gadget.  It might as well say, “CAUTION:  Lucas will be angry if you open this before he gets to open it!”  At least that’s what Whitney sees.

I snatched it up, threw it in my truck and rode back to work.  It’s like carrying a ticking bomb, except you cant want for it to explode and all the shiny screen bits get thrown at you like rice at a wedding reception.

I made it back to work, grabbed up a friend, Scott (G1 Owner), and we opened it up! 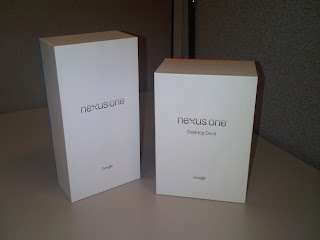 First thing Scott said was, “It looks like cologne.”  He’s right.  It was two boxes; one for the nexus one and the other for a docking station.  Both of these boxes share the same design.  A great idea or at least I like the prestige of the originality of the packaging as a whole.  Clearly, white is the obvious dramatic effect that reflects the google.com white space we all see every day.  “nexus one” in lower caps on the front and each shade of the Blue, Green, Red and Yellow bottom edge of the boxes match the “Google” logo colors and it’s sharp; quaint, but effective.

As you can see here.  Very cool.  And just as Scott said, it does kinda look and feel like cologne packaging.  But it’s heavy and solid and looks great as a desk display.  (lol) 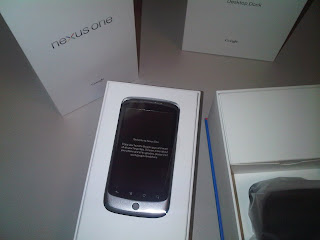 Wasting no time, I pulled the phone box open to get my hands on this device.  Beautiful….peaceful, ready.  I stumbled through the directions only to find that the battery is bone dry and it needs to be charged.  Ok, no problem.  I have it.  I OWN it.

SO, I looked at the exterior and checked out a few more features and put it in my hand. It has a good weight.  Much like the iPhone but a bit more solid(?).  The matte finish makes the reflection of the screen stand out a bit.  The controls on the very button are part of the screen and not actually buttons as I assumed from the pictures.  I am impressed.  I haven’t even turned it on yet.  This is going to be good.

The track ball is standard.  Nothing impressive, my Blackberry has a trackball and I have mastered the little rolling decision maker. 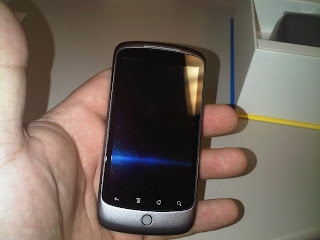 One of the offers was to engrave the nexus one with a statement or phrase or signature to the back of the case.  I thought for a moment and then decided on ‘lucaslshaffer’.  I have recently focused all of my energy into creating a persona around this formal name cluster that I thought it fitting to put just that on my phone as it will be the point at which the world will connect to me.  And thru lucaslshaffer is what most people who know me now will see on the screen.  So, here it is… 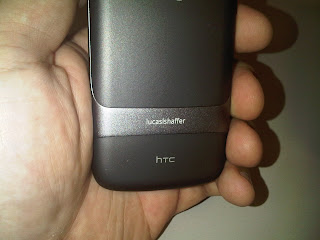 Alas, this is just the arrival.  I have already began to put together the next post including video using my Flip (Thanks Whit!)  As for the charging station, it was standard. It was high-gloss and allows the nexus one to stand up and face the user at a slant.  It also has an audio output.  The 3.5 mm jack converts in to component L/R RCA jacks and is ready to play music at a corresponding input.  I will include some other pictures on the bottom of this thread.
More to come as I struggle to find time to keep this blog and do many of the other things that are necessary to keep my head above water.  And my wife happy! 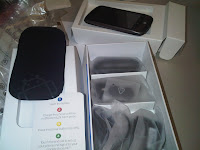 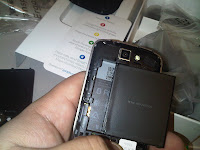 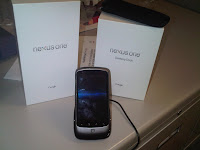 Saying Goodbye To A Smartphone: A Novella On Pride
April 17, 2011

The Almost iPad 2 Owner And His New Android Tablet
April 7, 2011

Nexus One Waterproof? This Is Why My Phone Is So Much Better Than Yours!
June 19, 2010